Volume Software is pleased to introduce the new features included in Direct Planning 3.7.

When moving a job using the mouse, at the edge of the screen, the window is no longer recentered on the job after the moving action.

After an import, in case of error or warning, Direct Planning enables you to open the import log:

Redesigned for more compactness, it is now displayed in a window which is embedded in Direct Planning. In the log, the warnings in yellow and errors in red are now easier to identify:

A quick filter is available to view only warnings and errors:

The search field enables you to find quickly a character string in the log.
For example, this will allow us to find all the import lines associated with a WO number:

You can also browse quickly the import logs from previous imports:

In the same fashion as you could modify dynamically your machine calendars, by assigning standard days and/or weeks with given week and days, you can now perform these operations using the following import commands:

Example of modification of the standard week using its designation (CAL-ST-L command):

Before importing: On machine 2100, the standard week assigned with week 12 is the „2×8 Even weeks” week:

The import file will modify this week by running the following command:

The following import confirms that the command was taken into account:

Result: The standard week of week 12 is now the week labelled „3×8 Even weeks”:

Lists of standard days and weeks

In lists of standard days and standard weeks, the „code” column was added, allowing to import standard days/week assignments with their code.

Excel exports are now made natively in the XLSX format. An Excel export can also be performed on a station where Excel is not installed.

The launch of external applications, introduced in the previous version, can now be performed with a right click on a job.

After an update, the new features of the version are now displayed upon starting Direct Planning. 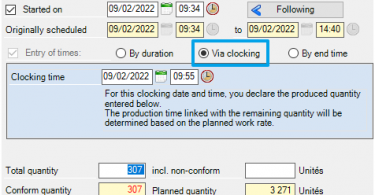 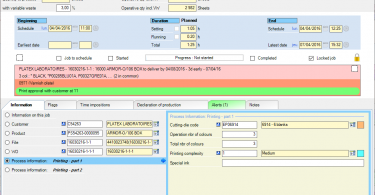 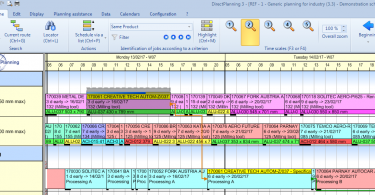 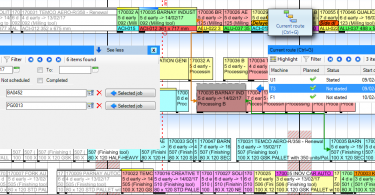 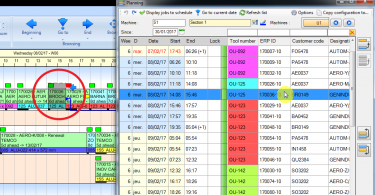 Direct Planning has enabled us to better respect our time limits and anticipate our workload. We are a cardboard company specialized in POS.

Previously, we had a manual schedule with labels, and times were a bit approximate. Today, with Direct Planning, I can schedule more accurately.

For any potential order, we draw up a retro-planning, which lets us set aside time on machines according to the requested deadline. When the order is actually placed by the customer, it is processed, then the transfer is directly performed and replaces the retro-planning.

This allows us keeping the initial, planned deadline. Direct Planning is simple to use and very user-friendly.

A company attentive to its customers; a passionate staff about what he does; solutions found and developed in a timely fashion.

Our thanks to the Volume Software team.

As a coordinator of various production lines for 4 years, my planning tool was poorly suited to our activity, cumbersome and took about 2 hours to print a report because it needed to compile information from a host of Excel files!

I’ve been using Direct Planning for only 2 months and I’m already sold on it! It’s the perfect tool because it is intuitive and user-friendly.

It adapts to our needs and enables us to inform various characteristics for easy, accurate and fast monitoring. The ability to display all production lines at once is a real asset.

Developing different interfaces allows to update the schedule quickly and automatically at any time of the day, with prompt generation of reports and histograms for a better communication with production teams and customers.

Direct Planning offered me better efficiency in terms of schedule reliability, responsiveness and decision making, and it simplifies the daily monitoring of indicators.

We’ve been using Direct Planning for almost 5 years and we can now testify with hindsight. We’ve been completely satisfied of the achieved feedback since we started scheduling with Direct Planning.

Direct Planning is perfectly adapted to schedule a cardboard-type production unit. It is easy to use and user-friendly.

Moreover, the flexibility of Direct Planning in terms of modelling and configuring is valuable.

I’m in charge of the Production Management and I’ve been using Direct Planning since 2013.

I needed a planning tool to address every day’s issues on the field. Direct Planning provides a clear and accurate overview of the workload of the production means, together with a high flexibility in the decision-making process. It’s also a very convenient tool to share information with the various functions of the company: thanks to the configurable lists, I’ve created a series of reports which I can share with my co-workers. Workload histograms, production hazards and other stuff may be easily obtained with great precision.

Direct Planning matches your needs, and not the other way around, that’s what makes the strength of our application.

After a little interfacing with our ERP to import the manufacturing orders, productivity has been boosted in the planning stage, while improving the accuracy of the production plan. This precision plays a key role to make the deadlines more reliable, thus to achieve customer satisfaction.